It’s been quite a while since I posted here at Blessed Brown Wren.

It’s not because life has been slow.

It’s not because God hasn’t been working.

It’s because God’s been working faster than my heart or head could process.

On Monday, April 11th, 2011 I received a second chance at life.  I was given a kidney during a living donor transplant.  Talk about life altering!  My friend, Cathy, gave a part of her own body to me so that I could live a more normal life.  A life not attached to machines.  Without this gift, I would have been doomed to years of dialysis treatments, 3 times a week, until a deceased donor organ could be found.  The search for a matching deceased donor usually takes 5-6 years.

The whole process took a few months, from my initial testing at The Medical College of Virginia last October, several people testing in January/February, and then the announcement that Cathy was the donor and we needed to schedule a surgery.  Fast.

God’s timing is always perfect – never too early, lest we rush things.  Never too late, lest we fall through the cracks.  Just as my body began to feel the true side-affects of the disease the plan was revealed and everything was set into motion.

48 hours after the surgery, Cathy was released from the hospital, just in time to watch her son be commissioned into the military.   6 days after surgery, I was released.

Today, Cathy’s mom drove her out to my house for a visit.  We sat on the front porch and talked about our experience and how blessed we both are with good health now.  Just for fun, we compared scars.  Her scar is under her right rib cage.  Mine is in my front lower abdomen.   We found it amazing that the organ doesn’t even have to go in the same part of the body that it came out of!

Both of our lives are forever changed.  Both for the better.  We now consider ourselves sisters.  United by surgery and our Heavenly Father. 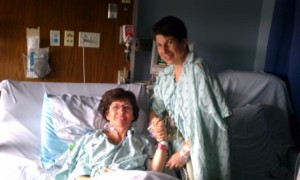 4 thoughts on “God’s Timing Is Perfect”