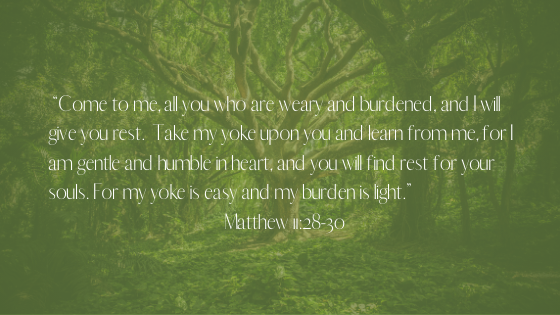 Twenty-one wheelbarrows full of sticks and debris.  Twenty-one!  That’s how many sticks I picked up over the course of one week in our yard.

Now, to be honest, they were sticks that had been amongst the tree-line surrounding our property for a few years.  A few years of casually picking up sticks and tossing them over to the tree-line to be taken care of later.  Well, now it was later.

Honestly, I didn’t mind the chore as I had recently been assigned to be sheltered in place by my doctors and husband during the COVID19 pandemic.

It was a pretty nice set up because it was a twofer.  A chore to be knocked off my long to-do list and also a great workout for my arms, legs, and backside.  In fact, most mornings, I eased out of bed feeling every single neglected and now overused muscle in my body.

Two days after picking up the last stick, it happened.  A storm came through and our yard was once again littered with sticks and debris.  Are you kidding me?

So, I grabbed the wheelbarrow and made my rounds through the yard again.  Five loads later, the task was done.

The next week, it happened again.  Another storm.  More sticks.  Are you stinking kidding me?

As I started picking up the debris, I realized something.  I noticed the sticks I was picking up were all dead – meaning, the storm had not broken off any living stick or branch. Hmmm. . .

The sticks that had been knocked out of the trees were all dead, damaged, or diseased.

Of course, my mind being as it is, went immediately to a life-lesson.

I recognized myself in these older trees around our property.  I’ve lived for a few years now and have endured the cycle of storms that have come through seasonally in my life.

Sometimes, like in a hurricane, there is physical damage done.  Whole branches ripped out of the tree and tons of green, thriving leaves blown off of the trees.  My body, full of scars and nerve damage, is proof of hurricane-like storms in my life.

But these dead branches and sticks were evidence of something that happened before the storms hit.  Some kind of damage was done or some disease took hold of it, or a natural die-off happened but the tree didn’t easily shed the decay.

This time of sheltering safely in my home, with all of my regular jobs and activities put on hold or changed completely, has begun to point out some of the dead and damaged things that need to be picked up and taken care of in my life.

This storm has shaken me and knocked some of my debris from its hiding place behind healthy twigs and leaves.

Now it is exposed and lying on the ground.

I could toss it to the side and plan to take care of it later.

Or I could grab the wheelbarrow of prayer and toss the debris into and let God take care of it.  His burden is light, after all.

What kind of debris am I talking about here?  It’s not unlike some of the debris you’ve found too.  Insecurities, fears, regrets, envy, gossip, gluttony, laziness, anger, idol worship, discontentment, impatience.  You name it, it’s there.

We’re all capable of these and it is human nature to want to toss them to the side.  But if like me, you’ve been praying that God would use this storm for good, then look for the sticks.

Walk the property.  Bend down and pick up the sticks with your own hands.  Then, toss them into the wheelbarrow of prayer and take them to God.

I didn’t tell you what I did with those wheelbarrow loads of sticks, did I?  Well, I hauled them to the back acreage and put them in a big pile.  Well, then. . . we set them on fire.  Hubs and I purposefully set them on fire.

It was a big fire.  A big, roaring fire that consumed those 21 wheelbarrow loads of sticks and debris (plus the 10 extra loads from the next several storms) until they were nothing but a pile of ash.  They are not a problem anymore because they were taken care of.

When we take our loads of debris to God in prayer, He promises to take them.  His plans for us do not include carrying tons of dead, diseased, or damaged things around.  The load He has for us to carry is light.

So, have you come across some sticks during this storm?  Have you decided what to do with them yet?  Let me know how you’re doing.  I’d love to hear how many wheelbarrow loads you’ve taken care of.

Lord, you are good.  Thank you for your promises.  Forgive me for the times I’ve hidden my debris from you and procrastinated in bringing it to you to process.  Bid me come, Lord, to push my wheelbarrow of debris to you to be exchanged for the light load you have for me.  Thank you Lord, in advance, for what you will do during this storm we are in right now.  We know you will be using it for good in our lives.

One thought on “Sticks in the storm”